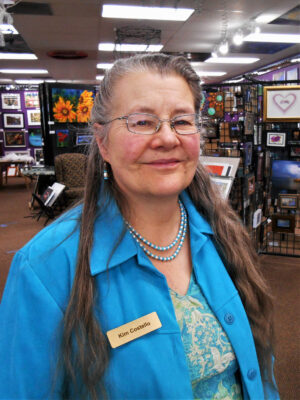 Kim is a native of Colorado and has lived in Colorado Springs since 1958, watching our beautiful city grow and change but always in love with the glory of our mountains at any time of day. She graduated from Mitchell High School and became one of the few intense, total image feather artists in the world.

She spent many years in galleries and shows before finding Academy Art & Frame and ‘coming home’, to where she was created to be, to share and encourage all those she meets. This is her ministry and passion for the artists of our community to be assisted in quality framing at affordable costs with a beautiful gallery to show case the variety of eclectic art she loves. 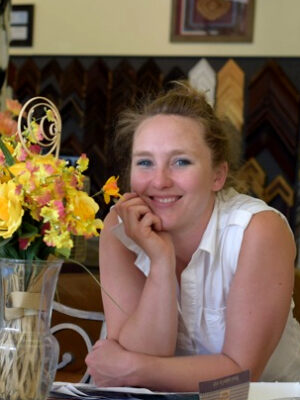 Cas was born and raised in Colorado but loves to travel and so has lived in many parts of Colorado, other states and even India. In 2002, she moved to Gunnison where she earned her Bachelor’s in Fine Arts (BFA) degree with emphasis in both photography and printmaking. After graduation in December 2006, Cas went to Ramana’s Garden, a children’s home and school, in Laxman Jhula, India as a volunteer. During her six month tenure, Cas worked with the children as a teacher, friend, and mentor. She often substituted in the classrooms and took over organization of the art program held every Saturday.

Upon return, Cas eventually moved to Colorado Springs, where she began work at Wolf Camera as a camera sales rep. With her background in art, photography, sales and people, Cas is an asset to AAFC.

She started working with Kim in June of 2011 as a custom framer, working her way to Master Framer, Framing Manager, Curator, Events Coordinator, Marketing Assistant, etc, and knows almost as much about the business of framing as Kim Costello (almost). Cas is the owner of Cas Foste Photography, a side business in fine art photography. In her spare time, Cas likes to hike, camp, read, dance, photograph and draw…oh, and dance. 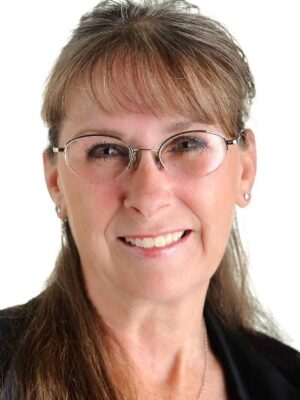 Bonnie Hamilton joined Academy Art & Frame Co. in September 2014 as a professional picture framer. In this role, Bonnie is dedicated to providing the customers at Academy Art & Frame Co. with excellent displays for their most cherished memories. Her careful application of the industry’s highest standards in quality and craftsmanship ensures our customers will receive years of enjoyment from their project which is often preserved with a museum-quality frame and archival materials.

Additionally, Bonnie particularly enjoys mounting and framing needlework. She learned embroidery, knitting, and needlepoint while in grade school and continues to design and create her own needle craft.

With decades of learning the best ways of preserving her own work, she has the expertise to assist our customers in choosing preservation methods that will best protect their treasured needle art. Regardless of what you need framed, you can be sure Bonnie will give your project the very best care, quality and attention to detail! 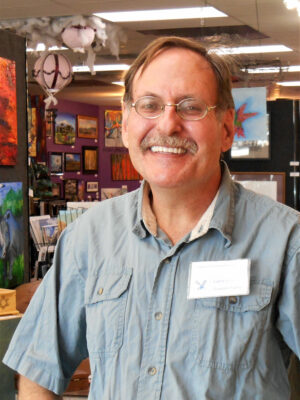 Larry joined Academy Art & Frame Company in January 2017 and has been a great addition to the framing team. His background in art and framing allows him to draw from experience to help give our customers that expertise they’ve come to expect.

Larry was born and raised in Southern California, eventually moving to Colorado and attending Colorado State University in Pueblo where he earned his Bachelor’s Degree in Fine Arts with emphasis in Drawing and Printmaking. His specialty in printmaking is hand-pulled mezzotints. During his school career he was the gallery assistant to the University.

Upon graduation, Larry continued working with art by joining the team in the frame shop at Hobby Lobby. After 5 years with Hobby Lobby, Larry decided to come join the AAFC team to get more in-depth knowledge of the art and framing world. He continues to do his drawing and enjoys the woods outside his new backdoor in Woodland Park.

“I enjoy the emphasis that Academy Art & Frame Company puts on quality workmanship and our ability to give the customer that little bit extra. The team has such a close nit family-like work mentality that adds to the quality emphasis.” 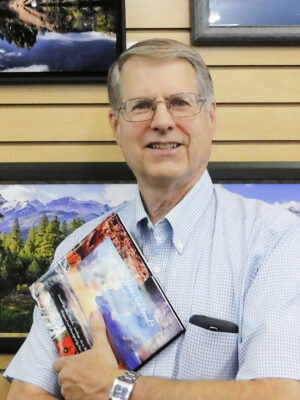 Chris Nelson received a Bachelor of Science in Electrical Engineering with emphasis in logic design from the University of Minnesota with additional formal technical and managerial education from the Air Force Institute of Technology and Colorado Technical University.

He is a strong advocate for integrity, professionalism and the advancement of both technology and the arts for the benefit of those within our spheres of living. Having retired from both a career in the Air Force and from the engineering field, Chris continues his interests in photography, wood working, teaching, and mentoring others in various personal living skills. Present endeavors include using his leadership, crafting and technical skills for the benefit of the church and arts community in Colorado Springs, Colorado. 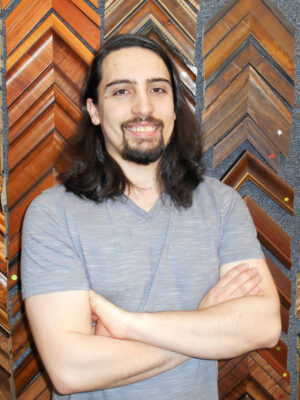 Justin was born and raised in Colorado Springs, and graduated from Pine Creek High School in 2015. He has been associated with Academy Art & Frame Co. for many years as his mother is an artist and has shown her work with the gallery.

He studied graphic design and video production for a few college years while working with Home Depot as a stocker. He came to AAFC last year as a beginner custom framer and does much of the maintenance and odd jobs for Kim.

A native of Colorado Springs, Roger graduated from St. Mary’s High School in 1977. He attended Rockhurst University from 1977-1981, receiving a Bachelor of Arts Degree, double majoring in Philosophy and Communication. He joined the Christian Service Volunteer program for 1 ½ years in Marceline, MO at St. Bonaventure Parish. Roger won a partial scholarship to The Broadcast Center in St. Louis, MO.

Returning to Colorado Springs, he worked for Duro-Test Lighting, RBM Precision Metal Products, The Leprechaun Shoppe, American National Bank, Comcast , First Commercial Bank and now has his own small business, Vintage Sports Productions. For the past 26 seasons, Roger has played Vintage Base Ball with the Colorado Vintage Base Ball Association. His book, Baseball in Colorado Springs was published on May 13, 2013. 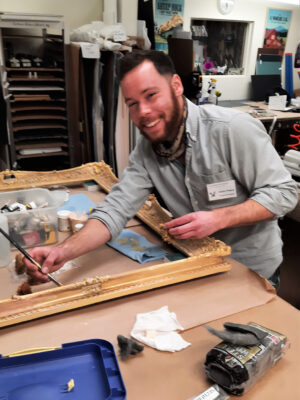 Steven Rogers joined Academy Art & Frame Company in October of 2020 as a professional custom framer. With 3 years of professional framing experience and a decade of professional illustration and painting experience Steven brings a new talent to the custom framing team. His interest in painting and striving to be a full time artist in the future introduced him to fine art restoration and conservation. In 2014, Steven graduated with a Bachelor in Fine Arts from Colorado State University with a concentration in Oil painting and Illustration. Upon graduation, Steven pursued a career in commercial illustration and started a part time framing internship with The Fine Art and Frame Company in Fort Collins. From there Steven was introduced to commercial framing and was able to build a foundation for Custom framing.

His philosophy when it comes to fine art restoration is to alter the artwork as little as possible with respect to the original intention of the artist. He examines each work of art closely and tailors his methodologies to meet both the needs of the painting and client. Academy Art & Frame Company use only the finest materials and techniques which are found in major museums around the world. In accordance with our belief that restoration should be noninvasive, all of the work we do is fully reversible and in accordance with the AIC Code of Ethics. Still young in the industry, Steven strives to learn and grow to create a live long career within the art world.

“My journey as an Artist has brought me to many places, but this place feels like home to me, and feel truly blessed to have the opportunity, to work along side and learn from such an amazing team.”

The art in my family’s blood runs impasto. I like to think I’m a self-taught artist who comes by it genetically, but no one develops their craft in a bubble. I skipped school a lot in high school. Often I would skip school to study art under the critical eyes of the masters at the Albright-Knox Art Museum in Buffalo, NY: Matisse, Renoir, Gauguin, Sisley, Picasso, Pollock, Warhol, Rauschenberg, Lichtenstein, and many more taught me more than I can describe here. I attained a BA in English Literature from Buffalo State College, and then spent 7 years editing books for a living, but I learned more about the world studying under Anselm Kiefer, Winslow Homer, and Amedeo Modigliani at the museum. I have had many art shows of my own in and around Colorado Springs over the past 20 years: in galleries, restaurants, schools, festivals, offices, dog and pony shows, underpasses, cornfields, you name it. I’ve been represented by several excellent galleries and venues as well. I recently worked in the art museum at the Fine Arts Center for 4 years and am now happy making things at Academy Art and Frame Co. See my art at ric-bascobert.pixels.com.

Whatever your framing or art needs, feel free to visit Academy Art & Frame Company today. We have a large, easily accessible parking lot, and we are open six days a week for your convenience.